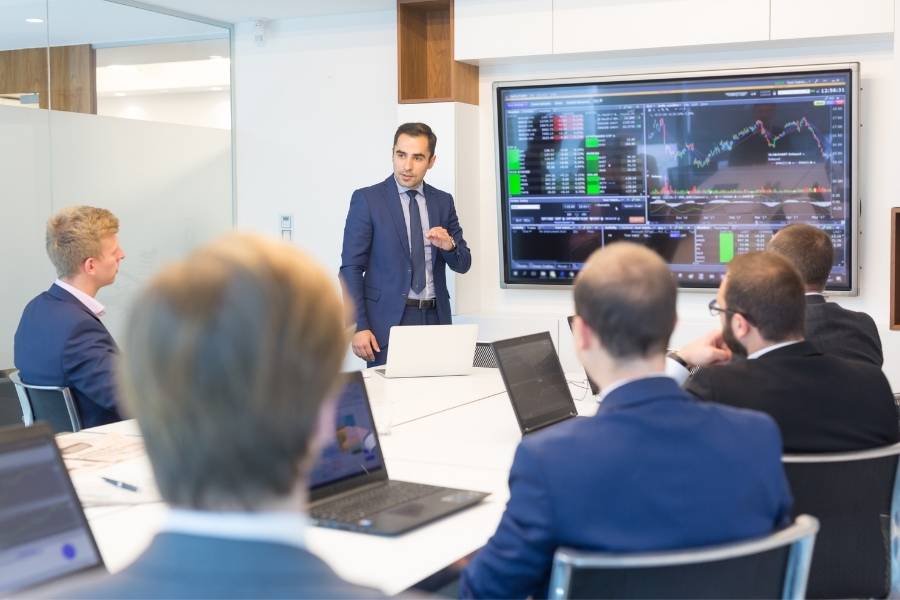 If you're an investor or take an interest in this kind of stuff, you probably heard of MicroStrategy and its actions regarding Bitcoin. Thus, you may want to know more about it. But what exactly is MicroStrategy, and what's its take on Bitcoin?

In a nutshell, MicroStrategy is a company that provides business intelligence, mobile software, and cloud-based services. What makes it related to Bitcoin is that it bought a large amount of this cryptocurrency. In general, it holds over 70,000 bitcoins in total.

Now, the question is, why did this company invest a large sum of assets in Bitcoin? Without further ado, let's take a more in-depth look into this matter.

What is MicroStrategy company?

As I said earlier, MicroStrategy (MicroStrategy Inc.) is a company providing tech-related services. Among these are business intelligence, mobile software, and cloud-based services.

The company started in 1989, and its founders are Michael J. Saylor and Sanju Bansal.

Since then, the firm has continued to develop software that analyzes internal and external data. The main goal of these kinds of software is to make business decisions and to develop mobile apps.

Since they develop software that helps people decide business strategies, it's quite a promising move for the company to buy bitcoins in large amounts.

Thus, it's no wonder why the event of purchase stirred up the crowd.

Now, let's get to know more about one of its founders - Michael Saylor.

Who is Michael Saylor?

Michael Saylor is the CEO and one of the founders of the business intelligence firm MicroStrategy. He has been pushing corporate moves into bitcoin for some time already.

As of the present, the company owns over 70 thousand bitcoins. The total worth of such assets amounts to $3.35 billion at current prices.

Since they started purchasing such a large amount of this cryptocurrency, it's one thing that makes them famous.

Moreover, it's the reason why many investors and non-investors are curious to know what he thinks about bitcoin.

How much BTC does MicroStrategy own?

MicroStrategy announced its first crypto purchase in August. It put existing cash on its balance sheet toward acquiring almost 21,500 bitcoins.

As of the present, the company owns nearly 72 thousand bitcoins. Since the bitcoin's value back then was around $47000, the stake was nearly worth $3.4 billion.

How did MicroStrategy buy Bitcoin?

On the 21st of December last year, MicroStrategy announced that it had purchased around 29,646 bitcoins. It amounts to around $650 million in cash.

The company bought the said cryptocurrency following its Treasury Reserve Policy, at an average price of around $21,925 per bitcoin. It also includes the fees and expenses to buy such.

Since that time, the value of Bitcoin spiked. Thus, it means the bitcoins of the company are now more than triple what they paid.

In general, their bitcoin’s worth is now $3.6 billion, while they only bought it for around $650 million.

Moreover, the company's stock has more than sextupled since its first purchase in August last year. During that time, the bitcoin's price was only around $135 each.

Why MicroStrategy bought so many Bitcoins?

The company bought so many Bitcoins with the belief that it's a dependable store of value.

As the company acquired more bitcoin, they reaffirm that it's the world's most widely adopted cryptocurrency.

Further, MicroStrategy believes the proactive management of its balance sheet is a significant factor in the recent stock price appreciation. It comes along with the improved revenue and profitability performance of the company.

Another thing is that they believe this cryptocurrency will provide opportunities. Among these are better returns and preservation of the value of their capital over time than holding cash.

Lastly, the company also remains dedicated to the customers. They state that their goal is to operate a growing profitable business intelligence company.

What is Michael Saylor’s opinion on Bitcoins?

The company's action on purchasing bitcoin has been a spectacular move. Thus, many people are wondering about the CEO's take on this cryptocurrency.

Michael Saylor, the CEO of MicroStrategy, said he believes Bitcoin will continue appreciating its value. Further, he believes it will continue to the point when cryptocurrency becomes a stabilizing influence for the entire global financial system.

According to his prediction, Bitcoin’s market value would be worth $100 trillion in the future.

Due to the spike in the value of Bitcoin, the opinion of Michael Saylor towards bitcoin is quite promising.

For this reason, many investors start paying more attention to cryptocurrencies than before.

MicroStrategy offers a great example of what business intelligence companies should be. In general, they made a great move of buying large sums of Bitcoins and reap benefits today as the value spiked.

As an investor who plans on investing in Bitcoin, such events and success are worth noticing and considering. It should also serve as an inspiration to do more research and understand.

In the end, success happens to those like MicroStrategy who know their way around their investment actions.