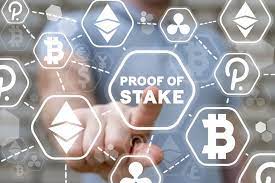 A lot of people see crypto as a long-term crypto investment. These are exactly the people, that could benefit from staking the most. Staking is a way of earning rewards for holding certain cryptocurrencies and fiat for a period of time. Assets are also used to verify transactions and support the stability of a blockchain network. It’s part of a consensus mechanism called proof-of-stake and is only available for cryptocurrencies that use this model.

Why do only some cryptocurrencies support staking?

Many cryptocurrencies, including Bitcoin and Ethereum 1.0 don’t support staking because they don’t use proof-of-stake.

They use an algorithm called proof-of-work. Proof-of-work is a system where computers compete against each other to be the first to solve complex puzzles.  The winner receives come crypto in return and the right to add the latest ‘’block’’ of verified transactions onto the blockchain. The process is commonly referred to as mining because it uses the energy and resources to complete the puzzle.

Proof of work is ideal for a relatively simple blockchain like Bitcoins, but it has been criticized by environmentalists for its energy consumption.

What is Proof of Stake?

Proof-of-stake is also an algorithm, but it doesn’t have miners. The equivalent of miners are validators. They don’t compete with each other to determine who can add a block. The network chooses validators based on the size of their stake and the length of time they’ve held it. This process is much more energy-efficient than proof-of-work operations.

The ‘’stake’’ amount, replaces the work miners do in proof-of-work. Participants have to spend money and dedicate financial resources to the network, similar to how miners use electricity. With more complex blockchains such as Ethereum’s 1.0, this might also result in higher fees, performance issues, and smaller scalability. To solve this problem, Ethereum 2.0 is going to transition its blockchain to a more scalable and more efficient proof-of-stake system.

Proof-of-stake’s security is also a little bit different. Proof-of-work has a similar mechanism to counter-attacks, but instead of controlling 51% of the mining hashrate and nodes, attackers would need at least 51% of the coins supply and control at least 51% of the network’s nodes.